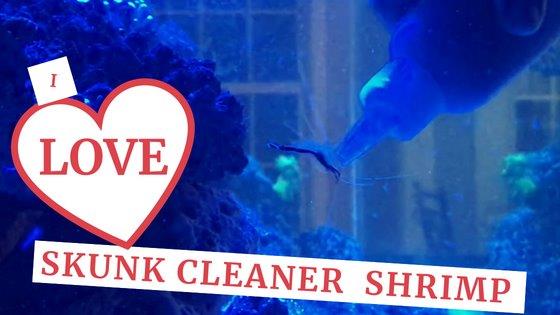 Are Skunk Cleaner Shrimp right for you?

The Skunk Cleaner Shrimp is in my opinion the most personable of all invertebrates you can add to your tank.  You can hand feed these guys and they will even crawl around on your hand cleaning them.

Where is the Skunk Cleaner Shrimp found?

Skunk cleaner shrimp are reef safe.  They are not known to eat coral and do to their symbiotic relationship with client fish, they are typically a very good addition to your tank.  They will actually clean the parasites off of any fish who willing to allow them to do so.  These are their client fish.

In the wild these shrimp will hang out with other cleaner shrimp and fish at what are referred to as cleaning stations.  Fish can approach these stations to be cleaned some even opening up to have the insides of their mouth cleaned. 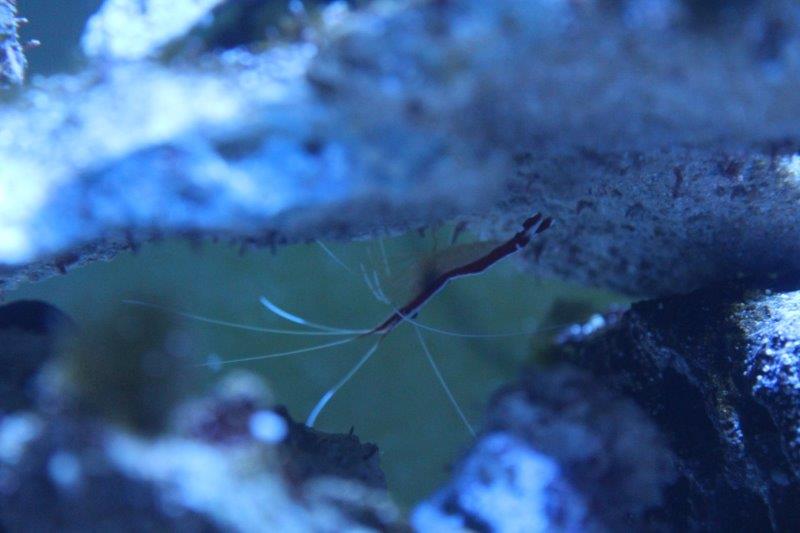 What do Skunk Cleaner Shrimp eat?

Skunk cleaner shrimp are omnivorous and will eat a healthy mix of algae growing in your tank and small invertebrates living in and on the rocks.  Let’s not forget they will also get a good bit of nutrition eating the parasites and dead flesh off of any willing fish.

Watching them eat is really interesting to me.  As they pick at the side of a fish their front legs will go super-fast picking and scrapping at anything that may be there.  The coolest though was when I have seen it snatch up a worm or brittle star off the rocks.  It happens so quickly and looks like a blur of legs in action.

Cleaner shrimp will eat parasites and dead tissue from the sides of fish and even clean out the cruddy bitts left between their teeth.  Because the ich parasite burrows into the flesh of the fish, the cleaner shrimp cannot in many cases get to the parasite to eat it.

If they are found on the outside of the fish while cleaning it will feed on it, but this should not be expected to solve an ich problem.

Most accounts of a cleaner shrimp eating ich off of a fish really refer to the shrimp cleaning off the dead tissue left from where the ich burrowed into the fishes skin.  The white spots commonly associated with ich is actually this dead tissue.

Skunk cleaner shrimp are sensitive to fast fluctuations in water conditions like most all invertebrates.  I have had the best luck doing drip acclimations.  This slowly adjusts all of the conditions of the water your shrimp came in to those of your tank.  You can them move your shrimp into the tank knowing he is comfortable with the water parameters.Save

What type of behavior can you expect from a Skunk Cleaner Shrimp?

These shrimp will pick somewhere in your tank, usually near a rock outcropping, cliff, or cave to setup shop.  They will spend 95% of their time within this small area.

They will scavenge and hunt for food as well as cleaning any fish who need good wash down.  They are not typically aggressive to tank mates and would more than likely be the one picked on than the one doing the bullying.

They are nosy and typically interested in your hand, at least mine is.  If I reach in anywhere near his rock, he comes out to play.

How do Skunk Cleaner Shrimp reproduce?

Skunk cleaner shrimp are all born as males.  As they mature they become a type of hermaphrodite.  This allows them to serve as both the male and female of their species reproductive process.

These eggs will be attached to the underside of the shrimp until they are ready to hatch.  Once the eggs have hatched the mature pair will molt and swap gender roles.

The larvae that hatch from the eggs are called nauplii.  They will be about 3 or 4 millimeters in size, right around 1/8”.  They then hatch into a form known as zoeae which float around in the water at the mercy to the current since they are unable to swim.

While floating in the water they will go through 14 known stages of molts over a period of about 6 months.  At this point they will be around 2 centimeters, just over ¾” in size.  They will settle to the rocks and substrate to live.

They will then molt every 3 to 8 weeks until they reach their mature adult form.

What are some good tank mates for the Skunk Cleaner Shrimp?

Since the skunk cleaner shrimp is a peaceful tank mate, they do best with other fairly peaceful tank mates.  We can instantly rule out anything that will chow down on the shrimp.  Things like lion fish, hawk fish, and most ells fall into this category.

Be mindful of other invertebrates that are overly aggressive and territorial.  I have a banded coral shrimp in the tank with my skunk cleaner and they seem to do well even living on opposite sides of the same rock.  My tank is well stocked with pods and unfortunately a thriving bristle worm population.  But because of this neither are having to hunt too hard for food which helps keep the peace.

Clowns, some Tangs, Wrasse, and Anthias all make good tank mates.  Just remember every one and every fish is different so keep an eye on any new additions and make sure they are cohabitating. 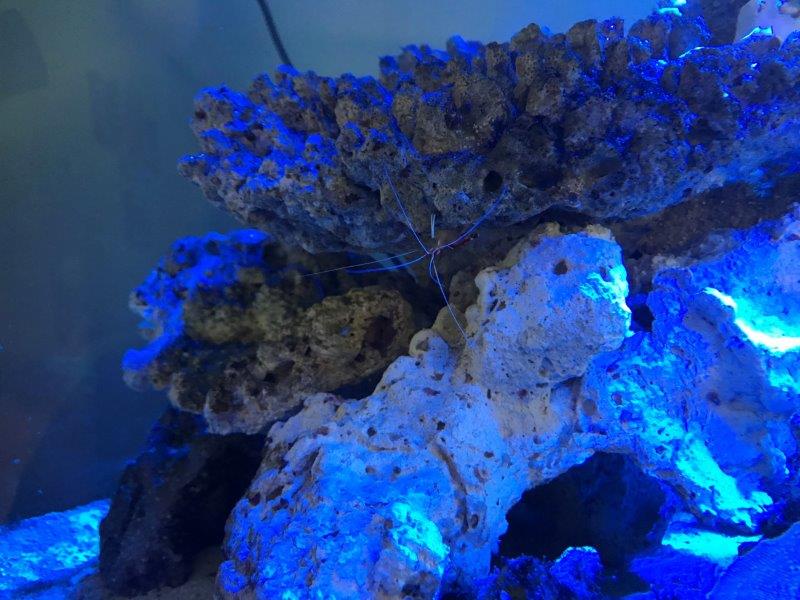 What is the lifespan of a Skunk Cleaner Shrimp?

Based on a quick search of the web you fill see most aquarists saying their shrimp lived about 2-3 years with some indicating 4-5.  These were also most likely purchased at round a year old maybe older based on what we know of their reproduction cycle.

That said I would say the average life expectancy in an aquarium will vary greatly on the stability of your tank.  Shrimp that died off at less than 2 years old probably had some outside influences that caused the death; high nitrates, ammonia, lack of food, etc.

If you can keep the conditions stable and the critters feed, I see no reason these won’t last 4-5 years in your tank.  This would mean the skunk cleaner shrimp has an overall life span of about 5-6 years.

What tank size is recommended for the Skunk Cleaner Shrimp?

The skunk cleaner shrimp does not need a lot of space for itself.  The size of the aquarium really depends on what other creatures you plan to keep with it and how much space they need.

You can keep one of these in a small nano tank with a little rockwork and some corals.  It is not uncommon to see these in a 2.5 – 5 gallon tank with one maybe two fish and a few snails.

To sum it up, my recommendation is if you don’t already have or plan to get anything that would not be a good tank mate for these guys, you should get a skunk cleaner shrimp.  They are peaceful, friendly, interesting to watch, and interactive.  It doesn’t get much better than that.

What is your experience with these shrimp?  Let us know in the comments below.