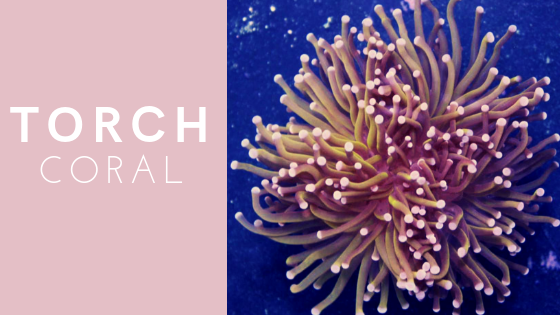 Are you ready for a Torch Coral

Torch corals get their most common name due to the way their tentacles flitter around in the water flow.  Each polyp or head of a torch has a hard-calcified base with a fleshy top that has long tentacles growing out of it which end with a bubble on its tip.  Typically, the bubble is a different color than the tentacle and as it flows in the water really resembles a torch waving in the wind. 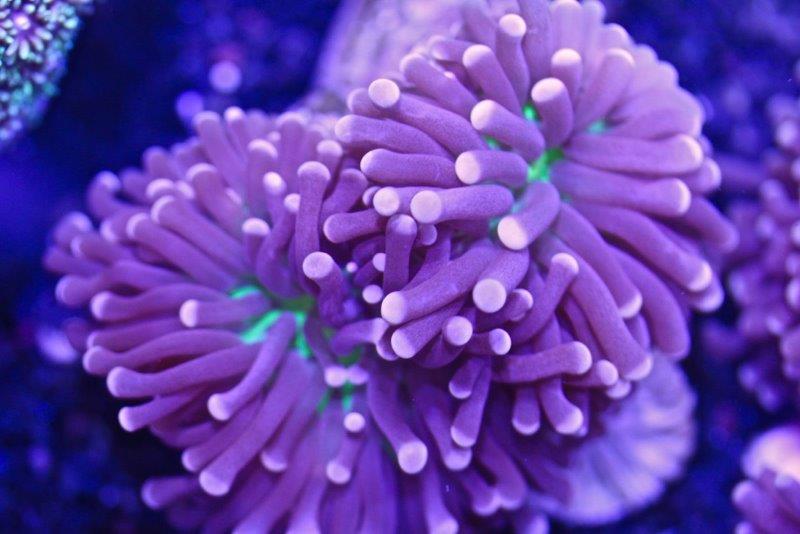 One of the more sought after standard colorations is the golden torch.  The golden torch has a brownish tentacle with a golden-brown bubble on its tip.  This is probably the color variation that earned it its name.

There are also some very uncommon colorations which is most likely due to the lighting they were exposed to as they grew.  I have seen some with blue and pink tips that almost glowed under actinic lights.

The Euphyllia glabrescens is most commonly known as the torch coral.  A few other names have popped up in the hobby, especially with some of the more colorful variations.  You may also see this coral referred to as the Pom-Pom coral or the Trumpet coral due to its resemblance to the shape of these objects as well. 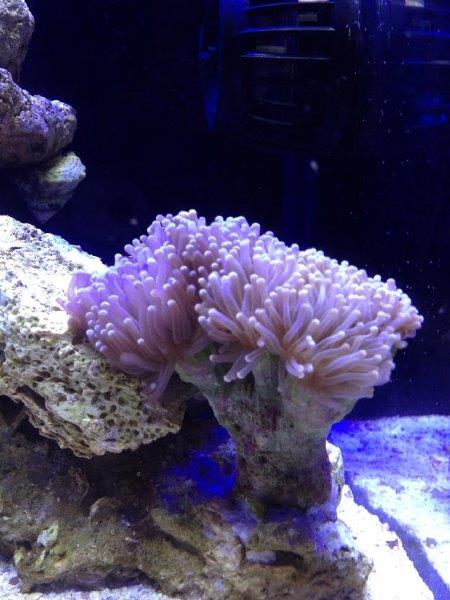 What do Torch Coral eat?

Torches are primarily photosynthetic and maintain a symbiotic relationship with zooxanthellae.  They will also feed on plank-tonic critters that float around in the water and get caught by their tentacles.  Torches are known to eat much larger meaty morsels if they get caught in its tentacles or is spot feed.

To see the best possible growth, it is best to feed your torches a meaty mix of shrimp, fish, etc.  Mix up some frozen meaty food in a glass of tank water to unthaw and match the temperature.   Suck the mixture out of the cup using a baster type utensil.

Getting the tip of the baster near the coral gently spray the food mixture around and into the tentacles, it will do the rest.  To give it a good chance to catch some of the food reducing water flow for a couple minutes would be beneficial while feeding.

What lighting requirements do Torch Coral have?

Torches do feed off of photosynthesis from the light, but they do not need extremely high intensity light to thrive.  In fact to much light could damage the coral.  This coral should be placed in your tank in a zone that has a low to lower mid par range of about 150 – 250.  You can move it up or down depending on how it does. Avoid putting it directly under the highest intensity of a metal halide or comparable light.  That much light intensity could damage the tissue of your coral.

What is the best placement for Torch coral?

These corals tend to do best in the lower areas of an average tank, often times just being placed on the substrate.  This allows them to get good lighting if a high intensity light is being used and generally allows for moderately turbulent waterflow.

Torches like the water to have constant movement without being directly blasted.  Direct high current can cause damage if the tissue of their tentacles is beat against their skeletal structure.  This becomes an issue because the damaged tissue is prone to infection which could kill off the coral. 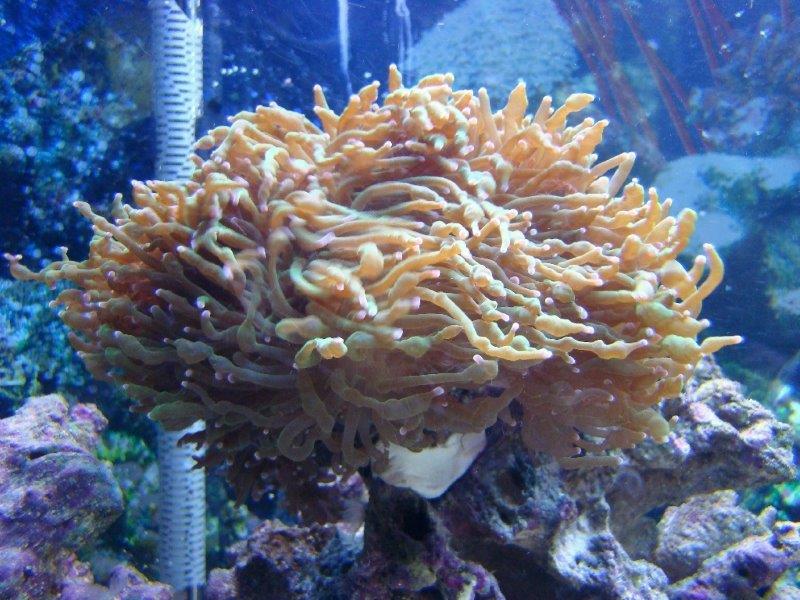 Where do Torch corals originate from?

What type of coral are Torches?

Torch corals are a LPS or Large Polyp Stony coral.  This means they will grow larger polyps over a calcified inner skeleton.  If you are stocking multiple LPS coral in your tank you will need to test your calcium and alkalinity levels regularly.

It will also be a good practice to dose for these two measurements to keep them in their optimum range as the corals use the minerals in the water.

How big do Torch coral get?

In the wild torch corals have been recorded at up to 20 inches across.  In the home aquarium they have been known to get about 8-10 inches.

Colonies can grow an infinite number of heads if given the proper conditions and food.  New heads will continue to grow so long as there is sufficient calcium and food to feed them. 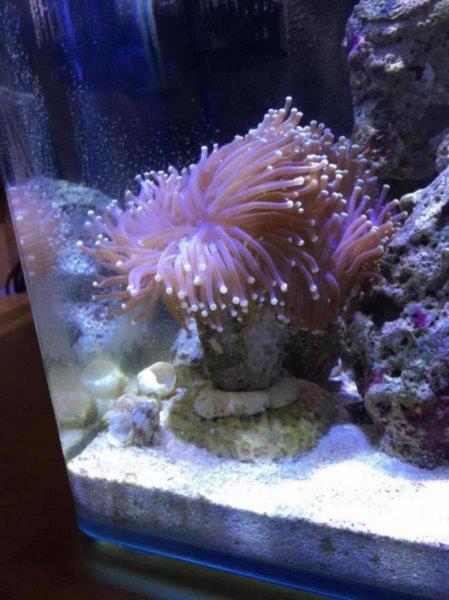 How do Torches reproduce or colonize?

Torch corals like most LPS corals reproduce by growing new heads off of the base of existing ones.  In order for this to happen the existing coral must be in optimum health.  Sufficient nutrients are also needed to allow the growth of a new calcified skeletal base.

To propagate torch corals, you will need to use a saw to give the coral the best chance to survive.  Remove one or more of the corals heads off of a colony by cutting through the base of the polyp 2-3 inches below the head.

Make sure that your cut is below the tissue that runs down the base from the head.  Damaging this tissue will increase the chance of infection and death of the coral.  This is also why we do not recommend using bone sheers.  Often times bone sheers can splinter the base up to the tissue.  This splinter could damage the tissue and lead to infection.

The down side or cons to having Torch Coral

The biggest downside to having torch corals is their constant need for calcium and other trace elements to grow.  These corals will use these minerals from the water in large quantities to grow and reproduce.  This means you will need to keep a regular eye on the quantities of these materials in the water.

Using a good test kit at least 1 to 2 times per week and adding some sort of additive is an absolute must if you want to have many of these corals in a tank.  If you do not have many corals of this type you could possibly get away with just doing water changes, since the fresh water with the salt mix will supply new calcium into the tank.

Torch corals are beautiful and intriguing additions to your tank.  They are very eye catching as they flow back and forth in the water current.  Spot feeding these guys will benefit and encourage growth and reproduction.  They will pull calcium and other minerals out of your tanks water as they grow.  Because of this you should test and maintain a minimum of 400ppm calcium whether done through water changes or additives depending on the calcium consumption.  This is a great coral and has been a major conversation piece in our tanks.

If you are just getting started with keeping corals I like to recommend a three phase approach when getting into coral.  This approach will help you level up your coral keeping skills and give you a jump start to a successful reef tank.  Read about my 3 phase beginner coral strategy here. 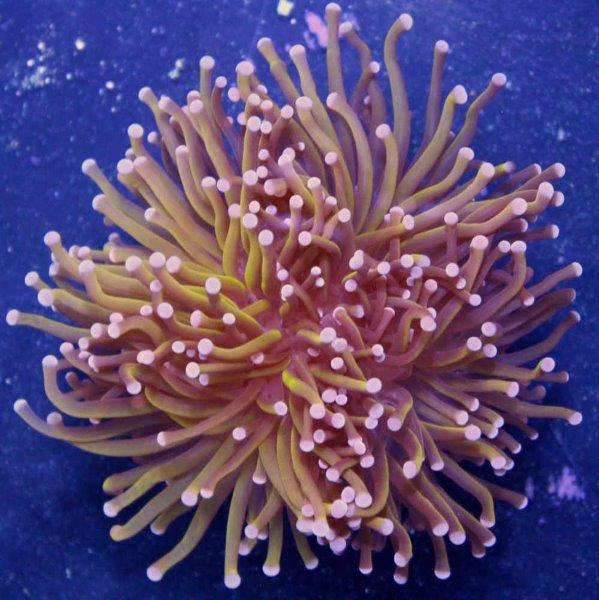 Is there anything else people should know about Torch Coral?  Let us know in the comments below.