The Coral Banded Shrimp is an amazingly intriguing specimen for the aquarium.  They are a relatively easy to care for creature.  Distinguishable by their red and white striped markings, long antenna, and two large pincer arms.

The common Coral Banded Shrimp known for its highly identifiable red and white stripes is the Stenopus hispidus.  He has a couple close cousins though with slight color variantions.  Outside of color they are very similar creatures.

The Blue or Purple Banded Coral Shrimp (Stenopus tenuirostiris) has a blue to purple abdomen region and typically a stronger purple colored plating on its back.  The legs will also have a blue to purple coloration. The color variation does not tend to affect the pincer arms and they usually remain red and white striped. 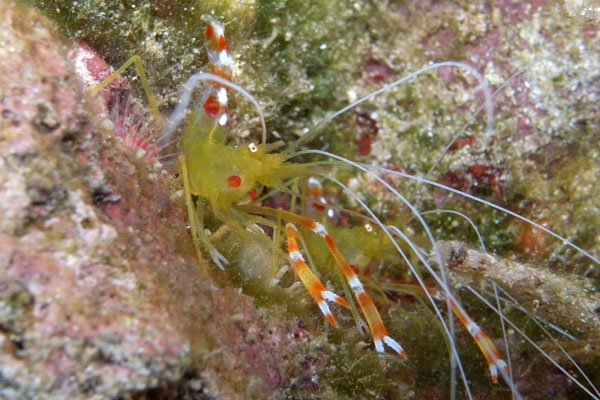 Where is the Coral Banded Shrimp Found?

Coral banded shrimp are found around the Caribbean, Hawaii, Indonesia, Sumatra, Cebu, and Sri Lanka.  They tend to live below the intertidal zone (shoreline that dries up at low tide).  Often making their home on coral reefs as deep as 700 feet.

Yes, Coral Banded Shrimp are primarily reef safe.  Keep a close eye on your specific specimen though.  They will often live peacefully in reef tanks for years, but they are semi-aggressive.  Some more so than others.  It is not uncommon to see them nipping at soft coral or anemones if they are hungry.  They are also territorial and other tank mates will learn to give them their space.

What do Coral Banded Shrimp eat?

Coral Banded Shrimp are carnivores and scavengers.  Yes, they do eat bristle worms (Polychaete) and will actively hunt them down if present in your tank.  These are often a good answer to these unwanted hitchhikers.

They will eat most flake food you feed your fish as well as frozen foods.  It is a good idea to try and spot feed your shrimp with a feeding pole from time to time, pushing food into whatever rockwork you see their antenna sticking out off.

Since they are carnivorous, that also means they can eat other tank inhabitants.  Most aquarists will tell you, they do not see too much of this with a well feed tank.  That said, they have been known to chow down on snails, hermit crabs, and other shrimp. 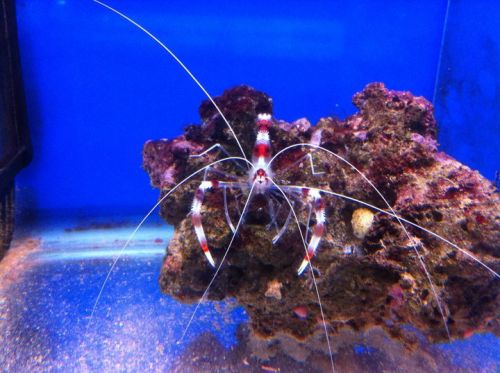 The drip method of acclimation should be used.  All invertebrates are very easily affected by sudden salinity, temperature, and pH swings.

Setup a bucket or bowl housing the shrimp in the water it came in, but with enough room for a good bit of water to be added.  Take water from your tank and slowly drip it into the bucket.  This causes the water parameters in the bucket to gradually match the water in your tank.  Allow them to drip for a couple hours to be safe.

Once the water parameters in the bucket are in line with your tanks; you can move the shrimp into your tank.  It is best that you do so w/out pulling it out into the air.  Allow the shrimp to slide into the tank from one container to another.  If your bucket is too big for this, try scooping it out of the bucket (and enough water to leave it submerged) with a smaller container if needed.

What type of behavior can you expect from a Coral Banded Shrimp?

These shrimp are scavengers by nature.  When not hiding in rockwork they will be all over the tank searching for food.  Anything that gets within claw reach is worth a good pinch too.

Most of the day will be spent hiding.  It is very easy to see where they are hanging out at though due to the tentacles that are in most cases longer than their actual body.  These tentacles will stick out of rocks like a, you are here, arrow.

As your shrimp grows they will molt.  When time to molt your shrimp will often hide in the rockwork for a couple of days reemerging and leaving husk of itself to blow around the bottom of the tank.

Another great aspect to the molting process, is that they will grow back any arms, claws, legs or antenna that are lost when they molt.  So, if you see one missing a claw don’t worry.  Give him a month or so to outgrow his current body and when he sheds it he will be back good as new.

Because of this molting process it is recommended that you supplement your tank with an Iodine dosing regiment.

Upside down from Frans De Backer on Vimeo.

How do Coral Banded Shrimp reproduce?

Just like so many of my club buddies back in the day, the Coral Banded Shrimp starts the courtship process by dancing in front of the female to get their attention.

To mate the male will transfer a sperm sack to a freshly molted female.  This will inseminate the eggs she is carrying and stick them to her legs and underbelly.  In just over two weeks the eggs will hatch.

Once hatched the young will remain attached to the mother for a month and a half.  Once detached they will float to the ocean’s surface to drift around with the current.  After growing and molting several times over a few weeks they will sink back to the bottom of the ocean to find a place to hide.  Preferably a dark cave or crevice.

When trying to identify the sex of a mated pair, the male can be identified normally as the smaller of the two.  The female’s ovaries are also generally visible through the translucent center body region.  They have a bluish color.

They will mate for life, usually selecting a mate at a young age.  If one of the pair dies they will not typically take another.

Breeding in captivity is not often successful because of the difficulty in getting a mated pair as well as the time newly hatched shrimp spend on top of the water does not fare well with most modern skimming filtration methods used in the hobby. 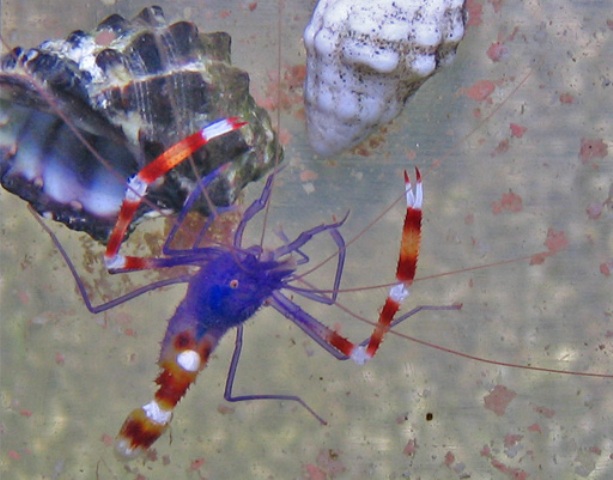 What are some good Tank Mates for the Coral Banded Shrimp?

A common tank mate question with these is, can I keep it with other cleaner shrimp? Some aquarist have successfully kept other shrimp with these but the Banded Shrimp is very territorial and will fight anything that gets to close.  Housing with other shrimp would not be recommended in smaller tanks.  If there is ample space for everyone, plenty of rockwork for everyone and you keep them all feed well you should have minimal issues.

Aggressive predatory fish should be avoided as tank mates.  Species such as Lionfish, Triggers, Groupers, and Eels are good examples of creatures who will think your new shrimp is what’s for dinner.

Good tank mates are going to be reef safe fish that are either fast enough to stay out of his reach or large enough to hold their own with it when he gets feisty.

What is the Lifespan of a Coral Banded Shrimp?

They are known to live around 2-3 years in good tank conditions.  Invertebrates are very sensitive creatures though and are affected by sudden shifts in water parameters.  If you can keep your parameters consistent long term, it could be possible to keep one longer than this.

How long have yours lived? Let me know in the comments .

What Tank size is recommended for this shrimp?

Advice on this will vary.  The common consensus though is at least 30 gallons or larger.

I have seen them kept in smaller 20 Gallon Nano tanks at local fish shops. Typical in these cases they are the primary creature in the tank with no fish, and no other inverts to really pick on other than a couple snails for algae duty.

Some will even recommend a tank of no less than 55 gallons to give plenty of area for tank mates to give them their space.

Personally I am going to say 30 gallons minimum, and if you want to try to keep them with other shrimp; keep it to 1 shrimp per 30 gallons of tank capacity.

No, this is not typical behavior.  They will snip their claws at anything that comes near them though, and are very territorial.  Most tank mates learn to just leave them alone.  That said, there is always that one rare case.

I saw a quote on a message board one time about the fish eating subject.  This comes from a forum thread where someone said they were thinking about getting a Coral Banded Shrimp and were asking what they could expect from it.  Here is one of the responses.

“I find them to be unpredictable. I’ve had several at different times some have been great while others were psychotic killers. (And yes I have seen one grab, kill and eat a damsel). In general I find that if I feed them regularly, they don’t become some kind of were-crustacean” – Tomaquar

So that you don’t go thinking they are mean though here is another post from the same forum thread discussion.

“I have had one for about a year and he is great.  He is a little aggressive but the other tank inhabitants learn to stay away. Mine comes out and eats when I feed the fish. I also have a cleaner shrimp, 3 peppermints and an arrow crab and they all get along great, no problems at all. The coral banded will scavenge most of the time and they do not require direct feeding. Just want to make sure the tank is big enough for him.”  – drw94

These shrimp are eye catching additions to a saltwater tank, and are something any guest who sees your tank will be enthralled with.  They are fairly easy to care for.  Make sure you keep them well fed, spot feeding as needed and be mindful of the tank mates you put them with.  Do those things and you should enjoy your coral banded shrimp for a long time.

What is your experience with this shrimp?  Let me know in the comments below.